Currently, it is widely distributed in North and South America, Asia (India, China), Africa. It began to be cultivated and used for food in Europe. Moreover, in many countries of the world: India, Mexico, USA, China, countries of South America, thousands of high-quality dietary food products are produced from amaranth for the prevention of various diseases.

Amaranth began to be called the culture of the 21st century 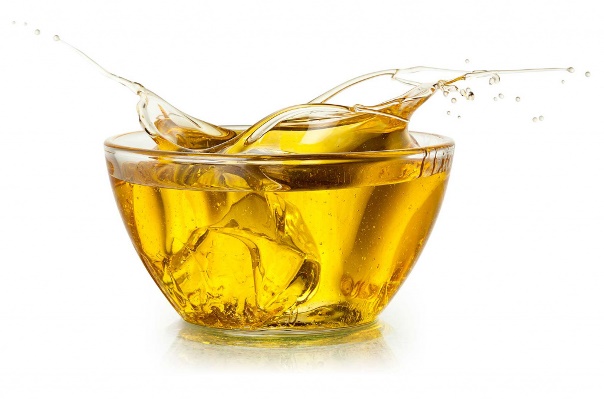 A significant contribution to the revival of amaranth was made by Robert Rodale, who created the Amaranth Institute in the USA and contributed to the introduction of this culture in many countries of the world.

Historical background and myths about amaranth:

It is believed that 8,000 years ago, amaranth was grown by Indian tribes in America. Amaranth seeds were prized so highly that they were considered a kind of equivalent to gold. The Aztecs knew that the use of amaranth strengthens the mind and body. And the products from it were used in caring for newborn children, sick, were obligatory for soldiers, because they gave strength in long and difficult campaigns.

So, the most incredible rumor about amaranth today is that eating amaranth grain and bread made from amaranth grain in ancient times, prolonged the life of people up to 300 years.

And also the myth that the cultivation of amaranth in Russia has been carried out since time immemorial, and was prohibited by Peter I.

The high medicinal properties of amaranth oil are manifested, first of all, in the presence in it of a substance that is quite rarely found in nature, called squalene. And also the richest composition of polyunsaturated fatty acids. The therapeutic effect is on the blood vessels of the body - they are cleared of cholesterol and other thrombus-forming elements, regeneration - restoration of damaged areas, their elasticity increases. The same thing happens with all organs and tissues - amaranth oil promotes their regeneration, purification and, as a result, rejuvenation and health improvement in general.

When using amaranth oil in the body, the amount of toxins, heavy metals, oxidants and other substances that destroy the health of the body decreases. According to research from scientists, squalene helps to shrink cancer cells.

The statement that amaranth as a culture was known from ancient times in Russia and was banned by Peter I has no documentary evidence. The official history of amaranth in Russia dates back to the dawn of the last century, when Academician N.I. Vavilov, after a trip to Mexico in 1930. While until the beginning of the 20th century, only a wild relative of amaranth was known in Russia - the thrown back (common) Amaranthus retroflexus L. amaranth family. Which is known as a fairly common weed, but, nevertheless, was often used for green fodder for livestock, sometimes greens were used for food. As you know, the grains of the common squid have a hard, black shell and have no nutritional value, and the yield of this plant is lower than that of amaranth.

But as it turns out, rumors about the ancient history of amaranth in Russia have some basis - according to archaeologists, amaranth seeds were found in the excavations of the sites of a primitive man of the late Paleolithic era near the village of Kostenki, which is twenty kilometers from the city of Voronezh. The age of various sites in this archaeological reserve is from 10 to 30 thousand years. Therefore, it can be assumed that grain amaranth was really known on the territory of present-day Russia from time immemorial and later, for some unknown reason, was forgotten as a culture and was brought back again only many centuries later from South and Central America. This most valuable product experienced a rebirth in the 20th century, when serious research began on it in the United States. Now hundreds of research institutes around the world are engaged in the revival of this ancient culture.

Amaranth as a grain crop

In terms of protein composition, amaranth grain is of the highest quality and, if, in accordance with the WHO requirements, the ideal protein has a SCOR of 100, then the SCOR of amaranth protein, as mentioned earlier, is 75, which is higher than the protein of even soy and milk casein.

Sowing 1 hectare requires only 0.5 kg of seeds, and the grain yield can reach 3-5 tons. Amaranth is an alternative to soybeans for many regions, especially for the middle regions of Russia.

Long-term tests have shown that in the southern districts of the Novgorod region it is possible to get more than 20 centners (2 tons) of grain per hectare, and soybeans are not cultivated in these climatic conditions. In areas with water scarcity, amaranth yields a crop in a ratio of 1–2000 (seeding rate - 0.5 kg, harvest - 1000 kg), and for traditional grain crops, this ratio is 1–5 (200 kg for sowing, 600–1000 kg for a crop ).

To achieve good digestibility of various wheat products. To do this, mix wheat flour and amaranth flour in a 5: 1 ratio. Currently, a technology has been developed for obtaining good harvests of amaranth grain in various climatic zones of Russia.

In a number of countries, flour is obtained from amaranth grain, which is used for the production of baby food, bakery products, confectionery products, and, albeit in very limited quantities, oil is also obtained, the residue after pressing which (meal) is used for animal feed.

The use of amaranth as a protein fortifier in the production of bakery products is very promising. Experienced pastries gave very good results: the bread had excellent taste, was lush and did not stale for a long time. Amino acid analysis showed that with the addition of amaranth, the bread acquired an improved amino acid composition. The possibility and feasibility of using amaranth in the production of confectionery dietary products, as well as in baby food, has also been established.

We have developed a technology for deep processing of amaranth grain, which makes it possible to extract oil, protein concentrate, starch and vitamin complex from it.

Grain amaranth is used in cosmetology in the production of oils, in cooking and in farming.

In memory of Kovas - a variety that appeared in Russia relatively recently, the leaves and flowers have a bright green tint. Despite the use of culture for grain production, it is successfully suitable for making tea or as a seasoning for meat, fish, poultry;

Helios - the variety is distinguished by high resistance to occurrence and mutation. The appearance is characterized by light green leaves with bright orange edging. It takes about 100 days to grow and develop.;

Kharkiv-1 - has yellow amaranth flowers and leaves of a dark green hue. Recommended for obtaining a large number of grains, with good care it grows up to 2 m in height.

Amaranth as a forage crop

It was found that 63 g of amaranth green mass in terms of the amount of protein is equivalent to 10 g of soybean grain. In production conditions, it has been shown that in our country, even at 60 ° north latitude, it is possible to obtain up to 300 centners (30 tons) of green mass of amaranth per hectare, and in the middle lane - up to 1000 centners (100 tons), soybeans under these conditions , as indicated above, is not cultivated at all. The green mass of amaranth is an excellent food for pigs and birds, as well as for cattle.

Before the collapse of the USSR, the need for amaranth products in the RSFSR for the production of high-quality feed was as follows: 3 million tons of granules and vitamin flour and 3-4 million tons of grain per year. When preparing concentrated feed, amaranth can replace soybeans, corn, fishmeal. The high potential of amaranth will make it possible to solve the problem of feed, which is important for the revival of animal husbandry in the country. Technological maps have been developed for the cultivation of amaranth as a raw material in the production of feed for animals and poultry. On the basis of granules from amaranth biomass, we proposed a dietary supplement for poultry feeding in order to reduce the content of cholesterol in its meat. A patent has been obtained for this biological supplement.

Fodder - used in cattle breeding as a nutritional supplement. Animals eat stems, leaves, and even roots. The varieties Imperator and Lera are recommended. The following types are also of interest:

The giant is unpretentious, grows quickly and reaches enormous sizes (up to 2 m in height). It is considered a valuable forage crop for cattle;

Kizlyarets - grown both as food for animals and for obtaining grains. It is characterized by bright red panicle inflorescences after full maturation.

Amaranth as a food or vegetable crop

In many countries of Latin America, Asia and Africa, amaranth is used as a vegetable crop. Given the nutritional value and high content of vitamins in amaranth leaves, they can be used to prepare salads, soups, side dishes. They are also dried and pickled for use in the winter. Protein concentrates, pectin, and also paint - amarantine (7–8) are obtained from the leaves.

At the same time, it is known that oxalic acid is formed in a significant amount in amaranth leaves, the accumulation of which in the human body is undesirable. Therefore, in addition to scientific interest, the elucidation of the regulation of oxalic acid metabolism attracts the attention of specialists involved in nutrition, dietetics, and toxicology. As a result of experimental work, we determined the stages of ontogenesis in the development of amaranth and the features of the use of fertilizers, at which the accumulation of oxalic acid in the leaves is minimal.

They are considered a storehouse of nutrients, but they are often used as a decoration for a garden plot. In cooking, it is used in the preparation of cereals, salads, soups and even for brewing tea.

Amaranth Tailed - has reddish and yellowish inflorescences with green leaves. In favorable conditions it grows up to 1.5 m. Ripens within two months. Often used for decorative purposes.

Valentine is an early maturing culture with purple inflorescences and leaves. Already on the 45th day, you can eat.

Amaranth as a source of valuable oil and squalene.

Amaranth grain surpasses traditional cereals and legumes not only in the content of protein, minerals and vitamins. The lipid composition of its seeds is also very valuable. A characteristic feature of amaranth lipids is a high content of squalene (5–7%), phospholipids and other substances with high biological activity. A technology has been developed for obtaining oil from amaranth seeds by cold pressing, which provides the output of high-quality oil with a maximum content of physiologically active compounds. We have developed the "Universal" drug, in which the content of Omega 6, Omega 3 and squalene has an optimal ratio for maintaining health. 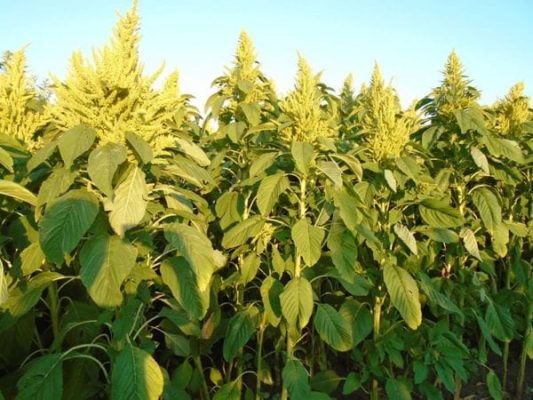 On the basis of this drug, it is possible to create dietary supplements to regulate the level of cholesterol in the blood, to increase the reproductive activity of a person, for use in oncology, gastroenterology and other fields of medicine for therapeutic and prophylactic purposes.

In conclusion, we present the most significant properties of amaranth as a culture of the 21st century.

CAUTION: Keep in mind that old amaranth leaves contain significant amounts of oxalic acid. Therefore, you should avoid eating them, especially for those people who have signs of gout, kidney disease, or rheumatoid arthritis.

Land prices in amaranth growing regions range from US $ 250 to US $ 700 per hectare.

Analysts of the «Geoburo» company believe that amaranth is a very promising crop for cultivation in the Volga region - along the Volga River, from the Nizhny Novgorod region to the South of Russia - the Astrakhan region.

The publication was prepared on November 30, 2021 by Andrey Kichaev, General Director of «GEOBURO» LLC.