Russia is a huge country, its territory stretched for several thousand kilometers. It has several time zones, several climatic zones and several dozen subspecies of soils. 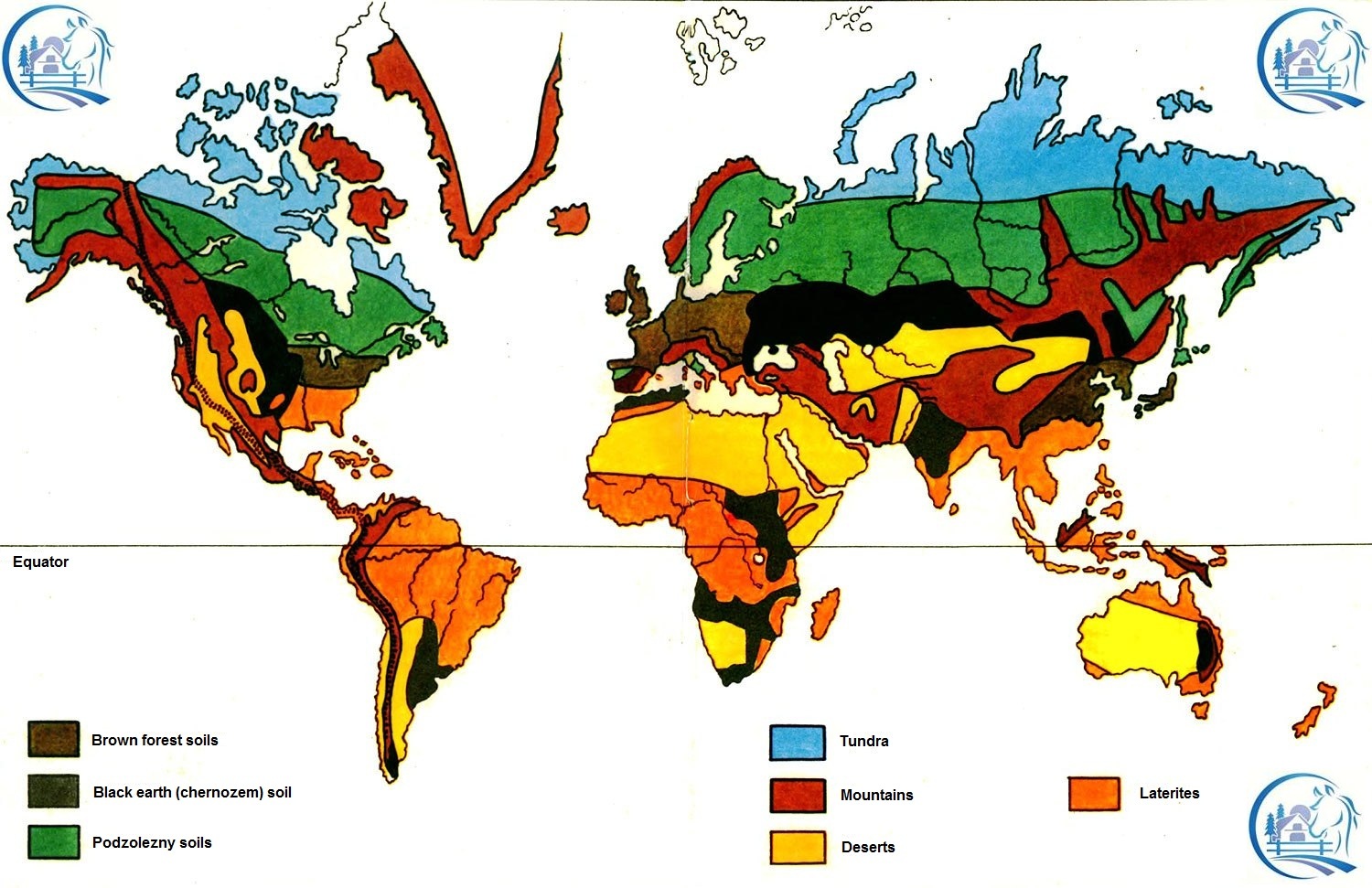 In the very north, in the zone of polar deserts and semi-deserts, ARCTIC SOILS are common. They have a poorly expressed soil profile, and soil processes in them are practically not expressed. The almost complete absence of vegetation does not allow the formation of humus. The humus horizon has a weak thickness of about 1 cm.

TUNDRA GEL SOILS or tundra gleems are formed in the tundra. Their formation is characterized by the same factors as for Arctic soils - a short period of active soil formation, low temperatures and permafrost. The permafrost underlying the soil horizon prevents the penetration of moisture, so tundra glue soils are always waterlogged. With constant waterlogging and lack of oxygen in the soil, iron compounds undergo a recovery process - gleying. Glue (ferrous form of iron) gives the soil a greenish and bluish-gray hue.

When moving south in the zone of coniferous and mixed forests of the East European and West Siberian plains with excessive moisture, podzolic soils are formed. They occupy more than 1/2 of the area of Russia. These soils are characterized by a podzol formation process and an acid reaction, which is unfavorable for growing agricultural plants. As a result of scanty vegetation in the coniferous forests of the taiga zone, humus forms little. Good drainage quickly flushes it, so podzolic soils have low fertility - the humus content in them is rarely more than 2% or not less than 10 centimeters of the humus layer.

In the zone of northern taiga, GLEEZODZOLIC SOILS are common; they form in drained areas with taiga mosses, lichens and coniferous shrub forests. In the upper horizons of the soils, gleying takes place; they have a strongly acid reaction. The humus content ranges from 2 to 4% of about 11-12 centimeters of the humus layer.

Under mixed coniferous-deciduous forests is the formation of SODIUM-DODZOLE SOILS. In these areas, the sums of active temperatures increase, and deciduous trees introduce more plant fall into the soil. Humus leaching is not as intense as in podzolic soils, and the presence of developed grass cover leads to the formation of sod in the upper part of the humus horizon. The humus horizon, in comparison with the podzolic, has a less acid reaction and is more saturated with bases. In the Far East and Eastern Siberia, where the continental climate increases sharply, permafrost-taiga soils are formed. The soil profile is poorly differentiated into horizons, humus is light in color, its content rises to 6–7%, and is characterized by an increased iron content of 12–13 centimeters of the humus layer.

In a continental climate with moderate moisture, GRAY FOREST SOIL form under deciduous forests with grass cover. They are characterized by periodically flushing water regime. They occupy a transitional position between sod-podzolic soils and chernozems. The humus content in them increases to 3–7% in northern light gray soils, 4–9% in gray forest soils, 6–12% in southern dark gray forest soils. The thickness of the humus horizon is 15–25 cm, 25–50 cm, and up to and 50 cm, respectively.

The most fertile soil in Russia is Chernozem. The territory of Russia accounts for about 50% of the area of world CHERNOZEMS (BLACK SOIL). The distribution range of chernozems lies within the forest and forest-steppe zone of the western borders of the country to Altai. In the eastern part, they are found up to the east of Transbaikalia. A favorable climate in the territories where chernozem is formed, with warm summers and mostly insufficient moisture, contributes to the decomposition of plant debris and the formation of humus and its gradual accumulation over time. The presence of a sufficient amount of calcium in chernozem soils makes it difficult to wash out the humus. Chernozem has a well-structured humus and an accumulative horizon of 32 to 142 centimeters, containing 4 to 12% humus and having a black color, and a horizon of carbonate accumulation.

CHESTNEY SOIL are formed in areas of southern cereal and grass-wormwood steppes. These areas are characterized by insufficient moisture and frequent droughts. The humus content is 2–5%, the thickness of the humus horizon is 15–50 cm. Chestnut soils are solonetzic, they often have an alkaline reaction, are densified, and swell strongly when moistened. Three subtypes stand out among chestnut soils: dark chestnut in the wettest areas, chestnut and light chestnut in the driest areas.

BROWN SEMILINE SOIL are found in semi-deserts of the southern part of the Caspian lowland. They are slightly humus 1.5–2.5%, and have permanent signs of solonetzic. Brown semi-desert soils are depleted in the upper horizons by sesquioxides, silt, calcium and magnesium. In the southern arid regions, where mineralized groundwater lies close to the surface, salt marshes and salt marshes are formed. Salts participate in the formation of their structure. These soils are characterized by ascending currents of water, as a result of which soil moisture with carbonates, gypsum and other mineral compounds dissolved in it is pulled to the surface and evaporates, and salts precipitate. In solonetzes, salts can be equally distributed over the entire profile or saturate individual horizons.

MALTS develop mainly in closed depressions and on non-drained plains in forests of steppes, steppes and semi-deserts. Their formation is mainly associated with desalination and desalinization of solonetzes under conditions of increased surface moisture. They are infertile and for a long time are in a waterlogged state, which limits their agricultural development.

VOLCANIC SOILS are formed under conditions of active volcanic activity on the volcanic ash of Kamchatka and the Kuril Islands. Under their modern profile, buried horizons often lie. The humus content in the upper horizons reaches 5–9%, flowing humus is observed in the middle and even low horizons. Common features of volcanic soils are specific ocher illuvial-metamorphic horizons due to the presence of easily weathered minerals in the mineralogical composition of soils, an abundance of amorphous minerals, allophone, and organomineral compounds.

WETLAND and ALLUVIAL (floodplain) SOIL are ubiquitous throughout the Russian Federation and are formed under conditions of increased moisture.

Soils of Russia have their own bonitet, these are SCORES of soil cover, which shows an assessment of the potential soil fertility and the laws of its change. Soil scoring was performed according to the original method. The weighted average soil cover bonus ranges from 0 to 125 in Russia. About this method and where, what bonitete I will discuss in my next article. 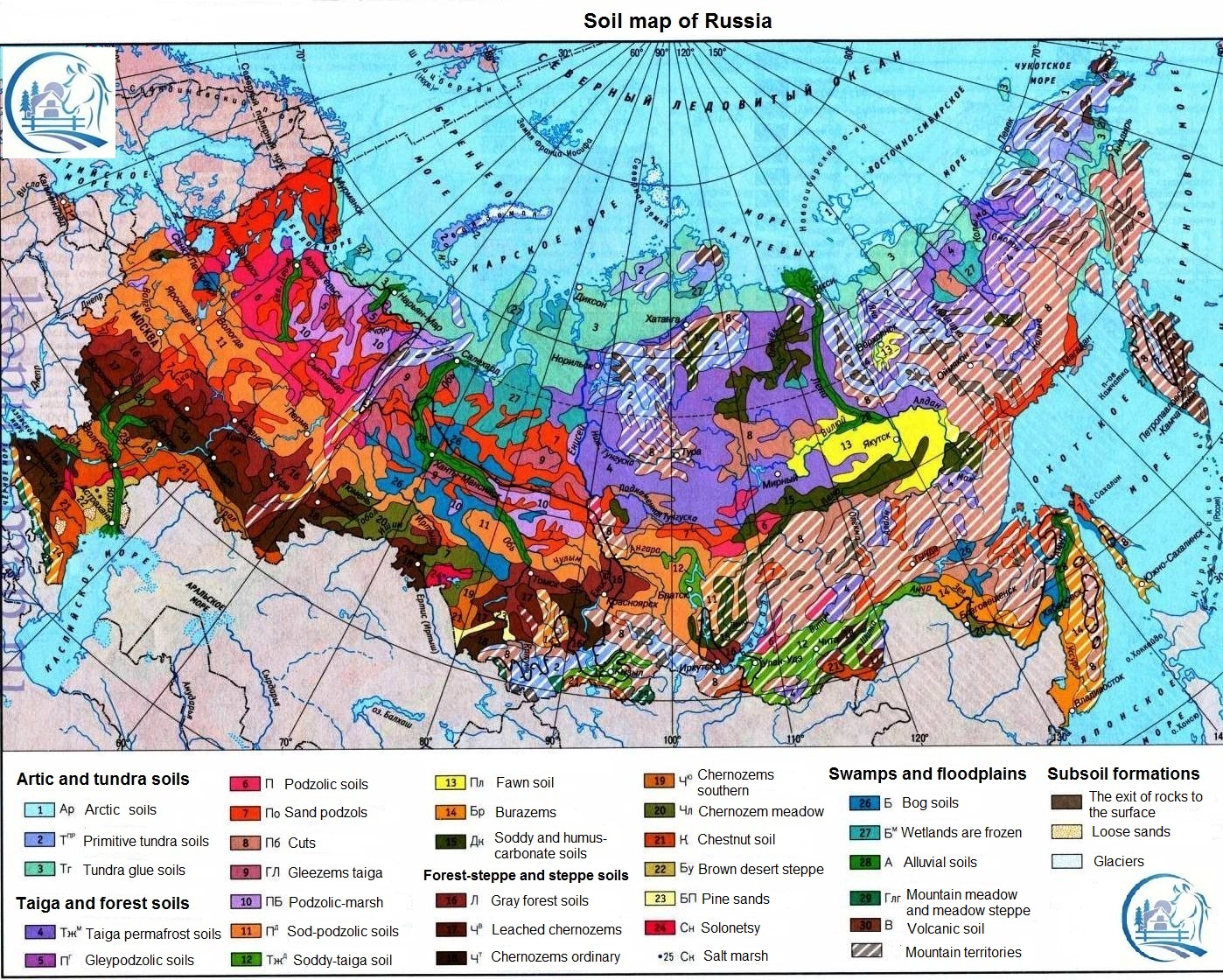 To buy a large plot of land in Russia and guarantee its payback in the future, you just need to contact us and we will help you.